Research by Colorado School of Mines faculty on the behavior of chains of colloidal molecules is headed to the International Space Station on a SpaceX flight scheduled for Dec. 4.

Professor David Marr and Associate Professor Ning Wu, both of the Department of Chemical and Biological Engineering, have been researching colloidal molecules for medical and other applications for several years. Now, they have the opportunity to learn how chains of these beads just several microns wide behave in microgravity.

“We’re trying to understand the basic dynamics of these chains,” Marr said. On Earth, “they’re kind of heavy—they sink very quickly, which makes them very hard to study. In microgravity, they’re freer to do what they do and we can observe that.”

Mines’ experiment is one of three—all colloidal in nature—that will be delivered to the International Space Station by SpaceX CRS-13. The samples—which fit into three small glass tubes—will likely sit for a couple of months. After some simulations and plenty of video communication with scientists, the astronauts on board will conduct the experiments and observe them using microscopes already on the ISS.

After establishing a baseline for their behavior, Marr and Wu hope to conduct experiments with electric and magnetic fields in microgravity as well, although equipment for that could take years to bring up.

The upcoming delivery has been years in the making, with the Mines team proposing the experiments back in 2014. Marr plans to fly down to Cape Canaveral, Florida, to witness the launch. “It’s pretty exciting.”

Previously, Marr and a team of researchers—Associate Professor Keith Neeves, postdoctoral fellow Onur Tasci and University of Colorado-Denver Associate Professor Paco Herson—developed a method for creating “microbots” that could be used to treat blood clots in humans. The tiny particles would be injected into the bloodstream and assembled into a wheel using a magnetic field. That same magnetic field directs the wheel to the site of the clot and spins to break it up.

Marr, Wu, Neeves, Tasci and PhD candidate Tao Yang are exploring using a similar technique to create “microlassos” that can pick up and transport medication and other substances throughout the body.

Chemical & Biological Engineering
Materials science
Space
About Mines
Colorado School of Mines is a public research university focused on science and engineering, where students and faculty together address the great challenges society faces today - particularly those related to the Earth, energy and the environment. 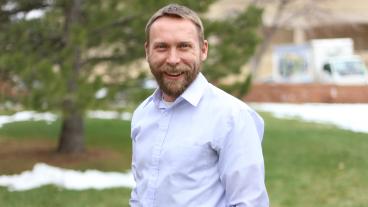