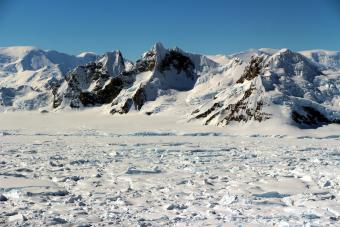 Remnants of the Wordie Ice Shelf on the Antarctic Peninsula in November 2017. (Photo: NASA/John Sonntag)

A Colorado School of Mines glaciologist was part of a science team led by researchers at Scripps Institution of Oceanography at UC San Diego that has created a detailed history of mass loss from Antarctica’s floating ice shelves.

The researchers used a 25-year record of data from four separate European Space Agency (ESA) satellite missions, NASA ice velocity data, and outputs from NASA computer models to find that these ice shelves have experienced a loss of nearly 4,000 gigatons since 1994 — producing an amount of meltwater that can nearly fill the Grand Canyon — as a result of melting from increased heat in the ocean under the ice shelves.

“What’s really astonishing is that our observations are finally good enough to pinpoint exactly at what depth this melt is occurring,” said Matthew Siegfried, assistant professor of geophysics at Mines. “That resolution helps us identify the specific ocean processes that drive the ice shelf melt and also how the cold freshwater released through melting will ultimately impact the global ocean system. It’s hard to really comprehend that we are starting to interrogate these processes occurring beneath thousands of feet of ice with observations from hundreds of miles above the surface.”

The NASA-funded study appears today in the journal Nature Geoscience and in addition to Siegfried, includes co-authors from NASA’s Goddard Space Flight Center and Earth and Space Research in Corvallis, Ore.

“This is the most convincing evidence so far that long-term changes in the Southern Ocean are the reason for ongoing Antarctic ice loss,” said lead author and Scripps Oceanography graduate student Susheel Adusumilli. “It’s incredible that we are able to use satellites that orbit around 500 miles above the earth to see changes in regions of the ocean where even ships can’t go.”

Detailed information on Antarctic ice shelves is hard to come by because of their vast size, and the difficulty for scientists to physically reach them. Satellites allow for year-round monitoring and are the only practical way to routinely collect information on Antarctic ice loss. For this study, the team used data from ESA radar satellites, which send radio waves to the ground up to 20,000 times a second and measure the travel time of those waves as they bounce back to the satellite. Researchers can use that information to determine the precise height of land or ice.

The result of analyzing these radar signals is the first-ever analysis of changes in melt of all Antarctic ice shelves, which collectively cover an area of 1.5 million square kilometers (580,000 square miles) – more than three times larger than California.

The 25-year record showed that there is a lot of variation around Antarctica in the rate at which the ocean is melting the ice shelves, but in total, there is more loss than gain of ice shelf mass. Although ice shelf loss itself does not directly contribute to sea-level rise because ice shelves are already floating, ice shelves do act as a buffer to help slow the slide of ice sheets from land into the ocean, and when they become smaller this effect is weakened.

If the West Antarctic Ice Sheet were to completely melt into the ocean, it would raise sea levels worldwide by around 3 meters (10 feet). Although that amount of melt is unlikely in the coming decades, even four inches of sea-level rise can double the frequency of flooding on the U.S. West Coast.

“We now have a continuous and detailed record of how all the ice shelves have changed since the mid-1990s, and where the meltwater has entered the ocean,” said Scripps Oceanography glaciologist Helen Amanda Fricker, a co-author on the paper. “This will allow us to decipher the atmospheric and ocean forces responsible for the changes, and how the meltwater affects the ocean, allowing us to improve models that predict future sea-level rise.”