By smoothing out landscape, wildfire has measurable impact on potential for catastrophic mudslides, debris flows 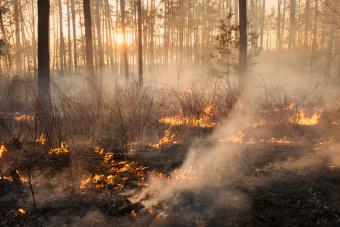 Wildfires are expected to continue to increase in frequency and magnitude across the Western U.S. over coming years, meaning more severe fires more often impacting states like Colorado, California and Washington, which are already dealing with major fire activity this year.

And while many of wildfire’s impacts on the landscape are well-studied, the models used to predict how sediment moves still can’t account for exactly what happens when vegetation – much of which has soil and other sediment trapped behind it – burns.

“Especially in steep landscapes, we know that sediment can get trapped behind obstacles like bushes and grass. When those burn, that sediment is released and can roll long distances downhill, which can cause a large amount of erosion,” said Danica Roth, assistant professor of geology and geological engineering at Colorado School of Mines. “Recent work by colleagues has suggested that if this material collects at the base of the hill where there’s a channel, it could then be swept away in the next big rainstorm, adding fuel to the potentially catastrophic mudflows or debris flows we often see after wildfire.”

In findings published this week in the Proceedings of the National Academy of Sciences, Roth and colleagues at Indiana University, University of Oregon and Vanderbilt University were able to quantitatively show, for the first time, just how the post-wildfire landscape can impact how sediment moves downslope.

“Wildfire systematically smooths landscapes – it’s intuitive but we haven’t measured it quantitatively before or found a way of modeling its impact on sediment motion,” said Roth, the lead author on the paper. “Postfire erosion and hazards are growing concerns all over the Western United States. Yet right now, we fundamentally can’t predict how sediment is going to move on these newly burned slopes.”

Researchers conducted field experiments for the study by dropping nearly 1,000 rocks on both wildfire-burned and heavily vegetated slopes in Oregon and measuring how far they traveled. What they found was that three major factors impact what’s called “nonlocal” or long-distance sediment transport – how big the rocks are, how steep the surface is and how rough the surface is.

“Roughness makes a huge difference in how far sediment travels,” Roth said. “Smaller rocks on low-angle or heavily vegetated slopes become more likely to stop the farther they travel, eventually hitting a statistical ‘wall’ that they’re extremely unlikely to travel past. But bigger rocks on steeper or smoother slopes can travel longer distances before hitting that wall. If the rocks are big enough, or slopes are steep or smooth enough, eventually they don’t encounter a wall at all, and instead start to ‘run away’—becoming less and less likely to stop the farther they travel.”

A key contribution of the study was a new model for characterizing and predicting these distinct regimes of sediment motion, which could have implications for both short-term erosion and longer-term landscape evolution as we enter a new era dominated by megafires and postfire erosional processes.

Co-authors on the paper were Tyler Doane of Indiana University; Joshua Roering and Aaron Zettler-Mann of University of Oregon; and David Furbish of Vanderbilt.

“There are still a lot of unanswered questions, but the statistical model we used in this study is a big step toward being able to apply more complex sediment transport models to real landscapes using real data,” Roth said.