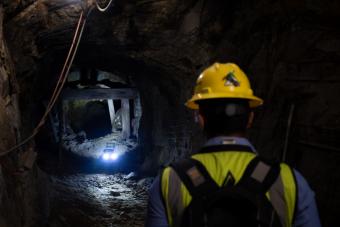 The mining industry is already using some AI in various models for making predictions in operational processes and exploration, but additional opportunities abound for human workers and machines to work together in challenging underground environments. The Edgar Mine, shown here, is an invaluable experimental resource for AI and robotics researchers at Mines. (Photo by Joe DelNero/Colorado School of Mines)

At power plants, the job of climbing the massive boiler walls and inspecting the tub is the kind of risky work people might want to give up to robots. “It’s pretty dangerous for humans,” said Hao Zhang, associate professor of computer science at Mines. Zhang, a roboticist, designed a robot with magnetic wheels to climb a boiler’s 12-foot walls vertically, using sensors to inspect the tub for cracks as it goes. “These water walls, pipes and tubes at power plants, people definitely don’t want to go in to perform these dangerous tasks.”

“We’re also designing an on-board repair tool so it can repair some cracks on site,” Zhang said. The robot has visual, thermal and ultrasonic sensors that scan the boiler walls. “We use machine learning to fuse all of these sensors together to see if there’s a crack, some other issue on the wall.”

How does the robot do this? “It’s reinforced learning, kind of like how we teach our kids,” Zhang said. “We use a reward to tell our kids if it’s good or bad. We use similar approaches to train a robot. That’s different from traditional supervised machine learning — this will enable robots to learn behaviors.”

This kind of artificial intelligence is a growing force in the global economy. Seventy percent of companies could adopt at least one type of AI technology by 2030, and that technology could add $13 trillion to the global economic output in the same time frame, according to a 2018 report from the McKinsey Global Institute.

“Artificial intelligence is certainly on the rise and has been for several years,” said Tracy Camp, department head and professor of computer science at Mines. “There’s just so much in our world today where we can use machine learning or AI to improve on our society or lives.”

Machine learning, which finds and uses patterns in large data sets, is the type of AI most people have interacted with, even if they don’t realize it. Machine learning algorithms find patterns in your viewing, reading and clicks to create your Netflix recommendations, choose what to show you on Facebook, and narrow down your Google searches. But this is just one of the ways artificial intelligence—which, put simply, lets machines make decisions that would otherwise rely on human expertise—is transforming how we live and work.

Mines’ computer science program reflects just how important AI has become. “So many of our classes are in the AI realm,” Camp said. “When you look at our graduate classes, we have computer vision, human robot interaction, machine learning, bioinformatics, augmented reality—all AI classes. We’re a small institution, but we have 10 graduate-level courses we’re offering in the fall, and half of them are related to AI.”

Though AI is often associated with disruption and job losses, the McKinsey report notes that increasing AI adoption will ultimately create more technical jobs. And at Mines, researchers are zeroed in on AI technologies that, like Zhang’s boiler bot, put human health and safety first.

The mining industry is already using some AI in various models for making predictions in operational processes and exploration, but the industry isn’t yet using it throughout the entire process, said Sebnem Duzgun, professor and Fred Banfield Distinguished Endowed Chair of Mining Engineering. “If it is deployed fully, there are more opportunities,” she said.  “It’s expected that in the near future, there are going to be deeper mines with some challenges, and with those we can use IoT for predicting the worker’s health and safety and fatigue,” she said, referring to “internet of things” technology from which AI can draw worker data to make predictions.

And the workers certainly will still be there, Duzgun said. Even though mines are increasingly using autonomous systems, humans will continue to be a critical part of the operation in the future—and humans will be an integral part of using AI to make mining safer and more efficient. “We have a combination of data from the environment, the machines and the human beings. And if you think of the three working together in a highly uncertain environment, there’s an opportunity to learn about the operation itself,” she said.

Zhang, who is also working with the U.S. Department of Transportation on a machine-learning project for oil and natural gas pipeline bots (their visual and electromagnetic sensors collect large data sets as they rove pipelines—too much data for people to interpret easily without AI help), said students who plan to go into this type of work after graduation need two kinds of training: “A core knowledge of machine learning and interdisciplinary experience. They need to understand the real-world problem, to understand the challenges, where the data comes from and why they have that kind of data.”

But in addition to an AI-educated workforce, there’s another factor limiting how far any industry can take AI technology—adoption. “In some fields, it’s easier to have acceptance,” said Xiaoli Zhang, associate professor of mechanical engineering. “It’s a trust issue.” She’s leading research on how automation and AI technologies change human behavior and human lives, as well as ways AI can be used to quickly retrain those who have lost a job to AI.

AI that seems almost like entertainment is easily adopted, she said. “On the other hand, anything that people feel is dangerous or scary—like a self-driving car, even though the technology is relatively ready—it needs time for people to accept it. That time could be five years or 10 years.”

Another hurdle for industries like mining and manufacturing is scalability. Hao Zhang’s pipeline bot is designed to help workers inspecting the line by identifying potential threats to its structural integrity. But one of the bigger problems to solve is how workers in the field can get the computing power they need to use the slew of data they’re getting from sensors. “They have a deep learning model. But it may take hundreds of hours on a computer to train the model. Even a deployed model needs a very powerful computer to do that,” he said. “When a person goes into the field, there’s probably no Wi-Fi. They probably don’t even have cell phones when they’re in the field, and they cannot easily carry a computer. So how can this tech be deployed for large-scale use?”

Mines is the perfect place for students to take a deep dive into specific interdisciplinary problems in AI, Camp said, and the computer science program is preparing students to be able to program algorithms and understand how they work, regardless of the field. “We're training students to be able to build the intelligence regardless of the domain,” she said. “We don’t train our students to be experts in all these different disciplines, but we encourage them to get training in whatever they're interested in, because you can take that and add it to computer science.” 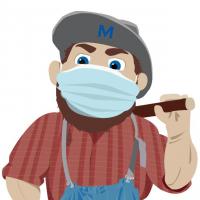 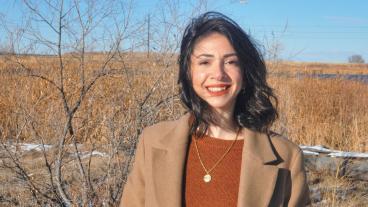