On Sept. 30, astrophysicist Neil deGrasse Tyson visited the Colorado School of Mines campus to speak to a sold-out crowd of students, alums, faculty, staff and community members in Lockridge Arena.

“This has got to be the geekiest audience I've ever seen; I’m not holding back,” Tyson said at the beginning of the night.

Tyson’s talk, part of the President’s Distinguished Lecture series and a kickoff to the 2015 homecoming weekend, was centered on “Astronomy Bizarre”— a grab-bag of unusual objects, phenomena and ideas in the universe. He included recent NASA images indicating evidence of salt water on Mars, and reminded the audience of Pluto’s status as a planet.

“We all thought Pluto was just trying to be a victim of its environment with craters and stuff that happened to it. But if you have mountains that means you’re doing something from within. You’ve got some action of your own,” Tyson said. “But regardless of all this, it’s still a dwarf planet; get over it.”

Tyson dropped “knowledge eggs” on the crowd, including his love of black holes.

“The Earth wants to kill us! So does the universe,” Tyson said. Later he added, “The universe is under no obligation to make sense to you.”

Recently Tyson served as executive editor and on camera host and narrator for “Cosmos: A SpaceTime Odyssey," the 21st century reboot of Carl Sagan's landmark television series. Tyson is the fifth head of the world-renowned Hayden Planetarium in New York City and the first occupant of its Frederick P. Rose Directorship. He is also a research associate of the Department of Astrophysics at the American Museum of Natural History. 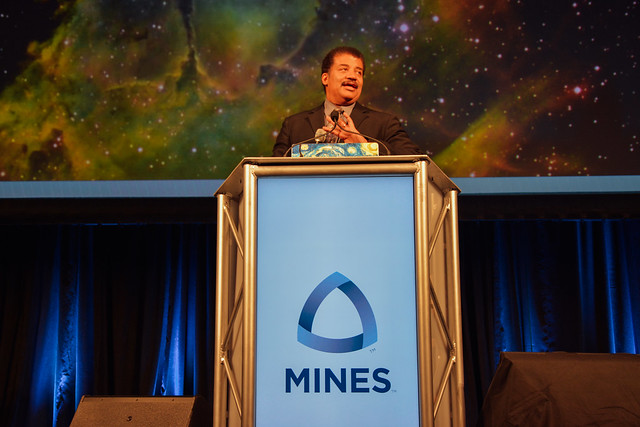 Faculty
Physics
Space & Space Resources
Students
Undergraduate
Water
Alumni
About Mines
Colorado School of Mines is a public research university focused on science and engineering, where students and faculty together address the great challenges society faces today - particularly those related to the Earth, energy and the environment.