The work of Mines' Mark Lusk and DU's Mark Siemens explores the possibility of using a laser beam as the medium for quantum science. 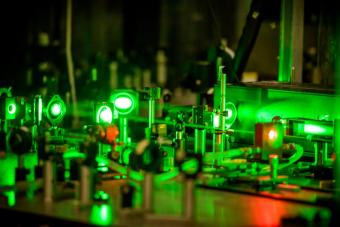 Colorado School of Mines and the University of Denver have received a highly prestigious $1 million grant from the W.M. Keck Foundation in support of an inter-university research project that could potentially culminate in a new path toward quantum computing.

The work of Mark Lusk, professor of physics at Mines, and Mark Siemens, associate professor in the Department of Physics and Astronomy at the College of Natural Science and Mathematics at DU, explores the possibility of using a laser beam as the medium for quantum science.

"This new connection is really exciting for us,” Siemens said. “It could launch a new age of accessibility for quantum science and, ultimately, computing. Imagine doing quantum measurements and calculations with a glorified laser pointer!"

Siemens and Lusk realized, though, that they could leverage the advanced state of laser technology to make similar optical architectures that are robust even at room temperature. Their idea is to engineer very small structures right into the laser beam that behave like the exotic particles currently being considered for use in quantum computing.

“Light with such detailed architecture has a complicated fluid-like behavior reminiscent of many small whirlpools interacting on the surface of a pond,” Lusk said. “We’re calling this topological fluids of light (TFL) because the laser whirlpools are topologically stable, a key property for the storage and manipulation of information.”

The project is a result of a collaboration between physicists at the two Denver metro institutions, creating a sound environment for rigorous scientific exploration. Lusk is a quantum field theorist who will focus on the fundamental properties of TFL. Siemens is an experimental physicist whose laser lab at DU will be doing the precise manipulation and propagation of designer laser beams (including the optical whirlpools needed to generate TFL).

Based in Los Angeles, the W. M. Keck Foundation was established in 1954 by the late W. M. Keck, founder of the Superior Oil Company. The Foundation’s grant making is focused primarily on pioneering efforts in the areas of medical research, science and engineering. The Foundation also maintains a Southern California Grant Program that provides support for the Los Angeles community, with a special emphasis on children and youth. For more information, please visit www.wmkeck.org.