A team of Colorado School of Mines students is one of just eight finalists in a NASA competition to design and build a system to extract water from the subsurface of Mars, and their ideas have a chance of someday making it into space.

The Mars Ice Challenge is a special edition of NASA’s Revolutionary Aerospace Systems Concepts – Academic Linkage (RASC-AL) brand of competitions. Student concepts are normally confined to papers and presentations, but to celebrate the 100th anniversary of NASA Langley Research Center this year, the eight chosen teams are being awarded $10,000 each to construct ice extraction prototypes and bring them to Virginia to demonstrate their effectiveness. The Mines team named the project Hidden Ground-Water Extraction Low Load System, or H.G. Wells—a reference to the author’s novel “War of the Worlds,” which tells the story of Martians invading Earth for its water.

However, their prototype actually uses an auger, a drill that includes a blade to bring material up, unlike the systems used in oil drilling today. “There’s very little similarity,” Kilb said. “In the industry, we use fluid and compressed gas to remove cuttings. But water doesn’t typically exist as a liquid on Mars, and there’s no compressed gas either.”

Still, some of the same factors have to be taken into consideration, Kilb said. There’s the weight being put on the bit, the rate of penetration and the strength of the equipment needed for successful extraction. Mines Petroleum Engineering Associate Professor Bill Eustes, an expert on terrestrial drilling, has proven to be a valuable resource.

“As a Canadian, we don’t have as many opportunities to work in space,” said Kilb, a transfer student. “To possibly contribute to something that could land on Mars is pretty cool. To have even gone through the same process that NASA engineers go through is cool.”

Mechanical engineering major Michael Szostak was on last year’s RASC-AL team, which made it to the finals. He enjoyed the experience so much that he wanted to do it every year, so he used his position as events coordinator for the Mines chapter of the American Institute of Aeronautics and Astronautics to recruit team members. “I’m very much psyched to be in the competition again,” he said.

Szostak, geophysical engineering student Kenneth Li and freshman Giorgio Cassata are tasked with designing and building the icebox, which will collect the cuttings, melt the ice and filter out the dirt, all while the drill operates. “Seventy percent of the competition is how much water you deliver,” Szostak said. “We’ll also be penalized if any large particulates end up in the water.”

Space is a passion for Szostak, who’s pursuing an area of special interest, akin to a minor, in space and planetary science and engineering. “I would like to work for NASA or a space resource company,” he said. “Asteroid, Mars, moon, you name it—I think energy can be cleanly obtained from outer space.”

While Li is part of the icebox team, his main task has been keeping track of expenses and the parts that remain to be ordered. Making sure they’re not taxed on orders has proven to be a big process, Li said. He’s only had to say no to one purchase: an $800 box used for packing fish.

“Mainly we’ve been under budget,” Li said. “Local companies have donated parts and have been extremely helpful with their time, and we’ve also been able to use components from old Mines projects.”

“It’s been amazing how generous industry has been,” added Kilb. “There are a lot of technical problems we haven’t been able to answer using Google, so I’ve just been cold-calling 20 to 30 engineers, who have been so helpful.”

Cassata notes that the icebox has changed quite a bit since the team first started meeting last semester—both its shape and how it’s mounted. “It’s really hard to figure out what the problems are going to be,” he said. “You figure out the best way to do each part and don’t realize how it’s going to affect other parts.”

Cassata plans on majoring in mechanical engineering, perhaps with an emphasis on biomechanics. “I love space in general and it’d be great to apply that somehow to space,” said Cassata, who volunteered at a small space museum near his hometown. “It was really good for feeding my interest.”

“We are on a huge learning curve right now, just trying to absorb as much information as we can online and from various people,” said Ellis. The team had originally planned on using a Raspberry Pi minicomputer to control the system, but after consulting with various experts, recently made the switch to a different device and programming language.

“It’s been great in terms of learning about circuits and how to design circuitry,” said Ellis, who has been taking a class on circuit theory as well as Python programming. “The knowledge has flowed both ways.”

The steep learning curve has made it interesting, said Tschirpke, who hopes to work in the aerospace industry after graduation. “There’s very little of this that we’ve done in class, so everything is new,” she said. “I’m really excited to see how we do against the other schools this summer.”

Kim said mechanical engineering students like him and Tschirpke typically haven’t had much exposure to the electronic and electrical side of engineering. “It’s been great to see electromechanical systems come together.”

Kim said working as part of a small team reinforces his desire to work in start-ups instead of large companies. “We’re very connected, the 10 of us—when one of us does something, we can quickly inform the others,” he said. “I’ve been on other teams with up to a hundred members, and it gets bureaucratic.”

Mechanical engineering students Tyler Perko and James Wood have been translating theory they’ve learned in the classroom directly to the project as the mechanical subsystem team. “I’ve been taking machine design and advanced mechanics and materials, and we’ve been talking about the same things that we’re working on,” Perko said, and the project has revealed that learning about something and doing it isn’t always an easy transition.

“Welding is a lot harder than you would think,” Perko said. “We probably practiced welding aluminum for a month before we started trying to weld the chassis together.”

“I’ve spent a lot of time in the machine shop, and I’ve enjoyed doing all the soldering,” Wood said. “I feel like I learn more going through a messing up and having to do it again. You don’t know how stuff is going to go wrong until it actually goes wrong.”

The team has been very careful to design around weight constraints, but they’re still working with a few unknowns. “The whole skeleton weighs almost nothing, and it meets the five factors of safety, so it should hold,” Wood said.

Advising the group is Angel Abbud-Madrid, a research associate professor in mechanical engineering and director of the Center for Space Resources at Mines.

“The whole point of this competition is for students to suggest ideas that NASA might actually pursue and get to use,” Abbud-Madrid said. The emphasis is on obtaining resources for astronauts who may travel to Mars in 2030 and beyond. “We cannot bring water from Earth—it’s too expensive, too heavy—but they will need it for drinking, for plants, split it into hydrogen and oxygen for breathing and propellant,” he explained.

As advisor, Abbud-Madrid provides a place to meet and work, channels the funding through the center, helps purchase materials and guides them through the process. Otherwise, “they do everything,” he said.

The team presents its midpoint progress report April 2, 2017, when they will be expected to prove they have a viable prototype. Once they pass that test, they’ll receive the second half of their funding of $5,000. The final competition takes place June 13 to 15, 2017, at NASA Langley. 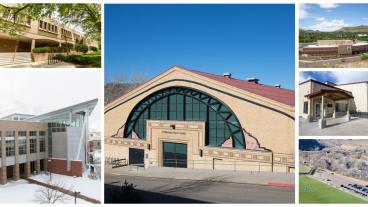